To extensively review and critique the good and bad of a series can sometimes be difficult, however those in-depth analysis’ can give validity to truly unique and innovative TV dramas. For some it’s hard to explain why they think a TV drama is a must watch series without reducing themselves to the stereotypical fanatic shouting ‘you have to watch this!’. However, the qualitative aspects of a show can be based around a few different key points, and in particular these points I want to share with you apply to foreign imported dramas than home-grown series in your respective country. Over the last year I have used my own ‘grid’ to review dramas which asks questions of the drama in terms of themes, innovation, cultural identity, representations, and the technical quality of production. This grid helps distinguish the qualitative aspects of a drama in a clear and professional way. What’s most interesting when using this method is the variation in relevance a show has to some of the points. Whilst some dramas may rank highly in the production category, some may suffer when it comes to its themes and ideas.

Ideas at the core of the programme:

One of the first and most important points for analysing quality is the programmes originality and innovation. This dictates the amount of effort that is used to either reinvent a genre or create a show unlike any other in the market. For example, whist The Killing might rank low in this category due to its repetition of the detective drama, Borgen would score highly because of the unique political storyline and portrayal of Danish politics.

Cultural and ethical relevance of the main topics. For me this defines current or historical events in the news reflected in the drama. One example of this would be 1864. Whilst it perfectly defines Danish culture and attitudes towards its own citizens and lands, it also carries ethical challenges for the audience in regards to the war and the treatment of the troops on the front line. For the audience, it’s a cathartic response. To  some, the scenes in the drama creates and primary viewer out of someone who might of just been a passive viewer of the show. In simpler terms it challenges the audience to make a decision whether the course of action given by some of the military hierarchy is right or wrong. The Swedish drama Real Humans also rates highly in this category since the show challenges our perception of technology being able to make life easier. The relevance to modern-day issues are high, especially when it comes to the perception that with the rise of intellectual machines comes the ability to replace real workers with a robotic counterpart.

A capacity to represent a/the world is something we see more and more in dramas – a push to create a distinguishable universe capable of representing a wide variety of people and places. In reference to Game of Thrones, its ability to create a world around the show is perhaps the strongest example we see today. Although it doesn’t represent our own world, it represents its own which varies widely from north to south in terms of wealth, attitude, alliances, and industry. Netflix’s new drama Narcos also has a well-defined universe in Columbia – but in contention with the view of a unified Columbia. The perception of the country as full of criminals working with cocaine is false. People actively fighting to stop the spread of the drug trafficking support the claim of a fractured society in the country.

Development of the ideas at the core of the programme:

The richness of themes is a basic technique when analysing TV content and can be vital when trying to establish the qualitative aspects of foreign drama. In Borgen we have themes of politics, deception, and power. These are often seen in most dramas but the quality of that theme can sometimes be the difference between a good and bad programme. The richness refers to how prominent the theme is and how much it relies on the theme to drive the narrative.

Adequacy of the places represented is the idea that when we watch the show we are able to feel the atmosphere of the town or city that the programme is set. For example, in Witnesses the bulk of the story takes part in the north-east coast of France. From watching the drama we can see that the town is dreary, grey and often pouring with rain. On top of that we rarely see a social setting inside the centre of the town adding to this idea that Le Treport is not the nicest of places to be.

The expressive use of lights, colours, photography and other features of the image is the first of the categories to explore the production value of a TV drama rather than the key theories and themes. An example of expressive use of light and colours can be seen in Deutschland 83. One of the main characters, Martin Rauch, is sent from the communist East Germany to the Democratic West to spy on the country, but what he finds is a vastly contrasting lifestyle to his own – a wealth of food and consumer goods. The scene in the Western Supermarket (shown below) is an example of the expressive use of colour in this show. What we see here are rows of brightly coloured fruit which is used to show the wealth of the state and the clear abundance of quality food that is available in the West. The contrast to an Eastern market is clear by the look on Martins face.

Expressive use of camera movements and framing is sometimes not appreciated fully. Whether this is unnoticed because of its apparent insignificance to a series, or because most it can be difficult to spot and asses, it does give the Cinematographer/Camera Videographer a chance to add to the quality of a show.

Not only this, the minimal use of camera angles and edits can also contribute to this expressive quality. A great example of this is The Bridge; whilst the usual taught method is to switch between two close-ups (depending on which character is talking) in a scene, the Scandinavian approach sometimes involves sticking to a variety of wide shots of a conversation and only use close-ups sparingly. The idea of this is that the switching between angles can affect the fluidity of a scene. Switching quickly between angles can also be a big disadvantage as each change should give the audience new information about the scene or character, which is unfortunately not taken into account on some American TV dramas.

Expressive use of titles and special effects is something that is secretly quite important to the audience. When it comes to tiles sequences it’s important to sumarise the programme in a stylistically innovative and relevant way. For Narcos the titles open with an aerial view of Columbia with map co-ordinates graphics overlaid. This represents the notes made by the narcotics division when trying to track the movements of the Narcos. We also see real archive footage of Columbia and Pablo Escobar which begin to tell us that this series not only tries to integrate real footage but create a show that best reflects the gratuitous deaths associated with drugs and gangs.

Mise en scène is an expression used in TV to describe the sets and props and how much of an impact they have on the scene. Danish show Arvingerne (Known in the UK as The Legacy) has one the most iconic and visually stunning mise en scene qualities of any Scandinavian drama. The Grønnegaard mansion is the physical representation of a Bohemian lifestyle – drawings on the walls, rusty old furniture, art sculptures in every room and all types of people staying for night after night. The mansion is a character in itself, and features in almost every episode. This is what constitutes a high quality mise en scène – the ability to create a distinguishable setting. 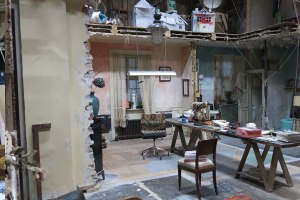 Communicative pact with the audience:

The ability to attract a wide audience is quite a difficult task. Not only does the actor want to portray the character to the truest nature of the script, but also be able to create a likeable and relatable character for an international market. Whilst this may not be the sole intent for a scriptwriter, the allure of creating a highly exportable programme is becoming more and more important. However, it’s more important to note that a programme has to be successful in its originating country – to alienate your own audience and culture is the quickest way to failure.

Main Characters are the crux of a TV drama – especially when it comes to Scandinavian dramas. Among other key points the ability to have a main character (or two as is the case with most detective dramas) that is capable of inhibiting, physically and emotionally, the character is what the audience will notice first. An exemplary main character is Saga Noren in The Bridge. She is no ordinary detective – with no friends and a workaholic attitude she becomes an instantly recognisable character. As the series goes on the audience pick up on what appears to be a mental disorder with Saga – some even comparing it to autism. Whilst this was not the intent of the writer, it becomes one of the intriguing talking points of the drama and all incited by the acting of Sofia Helen. Sofia delves deep into the world of Saga and brings to life a role that was just lines on a page.

Whilst you could say that there are dozens of categories to consider with a drama I find these points the crux of evaluating the quality of TV Drama. To use this effectively a degree of self-initiative is required. To write down pages and pages of notes and storyline can be excessive, however it makes the analysis and review of the programme much easier later on.

View all posts by Tom Dodd

My name Is Tom Dodd BSc (Hons) and I'm currently a TV graduate working in London.